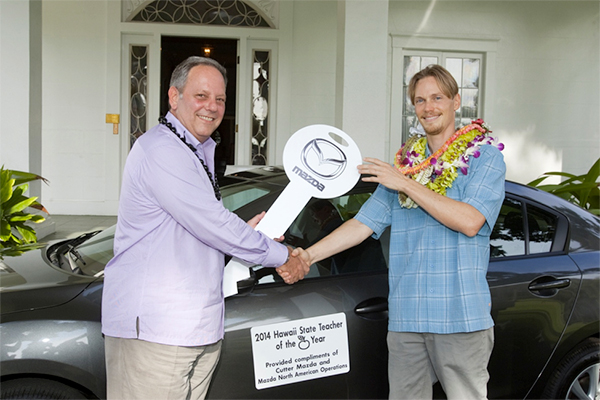 Cutter Mazda CEO Marc Cutter, in conjunction with Mazda North American Operations, provided a fuel-efficient 40 mpg-highway Mazda3 sedan to use for a year, to Matthew Lawrence, a teacher at Waikiki Elementary who was named the 2014 Hawaii State Teacher of the Year, during Department of Education ceremonies held at Washington Place, 3 p.m. Friday, October 25, 2013. Cutter said that developing category of fuel-efficient gasoline cars will make a major contribution to achieving the energy goals of the state.

“We all know that top teachers will help students to go a long way with a good education,”
said Cutter.

The Department of Education news release reported that “it is easy to spot Lawrence’s students, as they can be seen building climbing walls, solar powered go-carts and model homes, or a tennis ball launcher.”

“When a power outage occurred at the school in the 2009-2010 school year, the lights stayed on in Lawrence’s classroom, thanks to a student-built bicycle generator that powered six bulbs.

“In 2007, Lawrence launched a science fair to provide students a venue to share their experiments and creations with their peers and families.”
“A National Board Certified Teacher, Lawrence earned a bachelor’s degree in Elementary Education with Middle School Endorsement from the University of Illinois, and a master’s degree in Educational Psychology from the University of Hawaii at Manoa.”

“He has taught math and science at Waikiki Elementary since 2001, and served as the School Community Council chairman from 2006 to 2011. Lawrence is also a mentor teacher with the University of Hawaii undergraduate teaching program.”

“Lawrence will represent Hawaii in the National Teacher of the Year Program in the spring. Each April, the national winner is announced by the president of the United States.”